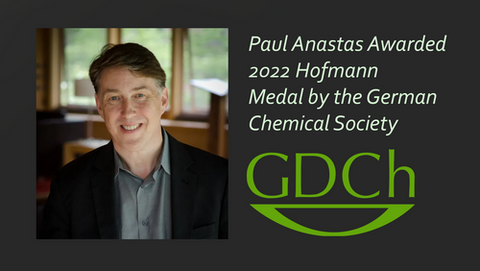 Professor Paul T. Anastas, the director of the Center for Green Chemistry and Green Engineering at Yale, was recently awarded the August Wilhelm von Hofmann Commemorative Medal by the German Chemistry Society at the 8th EuChemS Chemistry Congress in Lisbon on September 1, 2022. He was awarded the prize alongside John Warner, founder of the Warner Babcock Institute for Green Chemistry and Professor Anastas’ co-author and collaborator on the monumental work Green Chemistry: Theory and Practice. The Hofmann medal is awarded by the Germany Chemical Society to chemists who they deem have achieved great accomplishments within the field of chemistry. Past awardees include Omar Yaghi, a pioneer in the field of reticular chemistry, and Michael Grätzel, creator of the Grätzel cell.

The oft dubbed and celebrated “Father of Green Chemistry,” Professor Anastas was awarded the prize in recognition of his tireless work founding, promoting, and furthering the discipline of green chemistry. Green chemistry aims to establish a more environmentally friendly and benign chemistry, in which hazards, waste, and intrinsic toxicity are regarded as design flaws, and design for degradation plays a key role for new products. Rather than operating under the assumption that chemical waste and harm are unavoidable, green chemistry seeks to create chemical guidelines and processes that prevent any harm before the harm can be created. Rooted in the growing environmental movement of the late 20th century, a dawning understanding of the legacy of harmful chemical contamination of natural landscapes and human health, and new ideas about reducing waste in chemistry (atom economy), Paul Anastas and John Warner published Green Chemistry to push for a paradigm shift in chemistry—a safer and greener chemistry to protect all life, human and non-human, on Earth. With the awarding of the Hofmann prize by the German Chemical Society, this ongoing clarion call for better chemistry is being recognized and celebrated.

You can read more about the Hofmann prize and Professor Anastas’ work here: https://ysph.yale.edu/news-article/yale-professor-paul-anastas-receives-prestigious-august-wilhelm-von-hofmann-medal-as-co-founder-of-green-chemistry/.