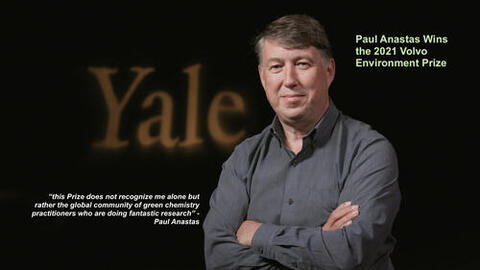 Paul Anastas, a Yale professor, and pioneer in developing non-hazardous chemicals, wins the 2021 Volvo Environment Prize,  one of the world’s most respected scientific environmental awards. The research of Paul Anastas “is revolutionizing the chemical industry, a key contribution to meeting the sustainability challenge,” says the Prize Jury.

New Haven, Conn. —Everything we touch, see and feel is chemical, whether it’s furniture, clothes we wear, medicines we take, or electronics that we use. For the past two centuries, chemistry has been creating technological miracles, increasing the human quality of life. But its performance has also led to unintended consequences of pollution, waste, and toxicity.

Paul Anastas, widely known as the “father of green chemistry,” set about to change this early in his career as a staff chemist in the US Environmental Protection Agency. He co-founded the Green Chemistry Institute and later served as an advisor in the White House and chief scientist at EPA. Professor Anastas is currently Director of Yale University’s Center for Green Chemistry and Green Engineering.

“Green chemistry is not about sacrifice,” says Paul Anastas. “The new products of green chemistry not only perform as well, they almost always perform better than the incumbent technologies. It’s because, historically, our way of converting one chemical into another has been rather brutish and ugly. We heat, beat and treat these substances, often making them more toxic. That increases the risk of them reacting with our bodies and the biosphere”.

Instead, Paul Anastas’ research has focused on how nature does it. He and his students have developed methods for generic molecular design for reduced toxicity and waste reduction. In addition, Paul Anastas has developed The Twelve Principles of Green Chemistry, a framework widely used by industry and universities. He has also championed the development of green chemistry networks operating in more than 30 countries, resulting in numerous actions, such as creating new bio-based plastics.  Or the redesign of manufacturing to reduce waste, which could have substantial environmental benefits since 90 percent of all materials that go into manufacturing wind up as waste immediately.

But the ultimate challenge is CO2, the primary driver of climate change. Paul Anastas is optimistic:

“What’s going on now is brilliant green chemistry that converts CO2to useful materials, such as buildings or bridges. Large quantities of CO2going into materials is part of shifting the equation. It’s one of the great challenges that green chemistry is meeting,

and this Prize does not recognize me alone but rather the global community of green chemistry practitioners who are doing fantastic research.”

Says the jury of the Volvo Environment Prize Foundation:

“Paul Anastas’ research is revolutionizing the chemical industry, from fundamental reaction methods to applications as diverse as processing foods and producing green hydrogen.”

“How we tackle the enormous environmental challenges ahead must be guided by science. That is the reason for the Volvo Environment Prize’s existence. But the Prize doesn’t exist just to tell the scientists: good job. It’s also here to tell everyone else to listen and to act.”

The Volvo Environment Prizehas for 32 years been awarded annually to people who have made outstanding scientific discoveries within sustainability. Three of the laureates have later been awarded the Nobel Prize. The Prize will be celebrated on Dec 1. with a live streaming prize ceremony and seminar.