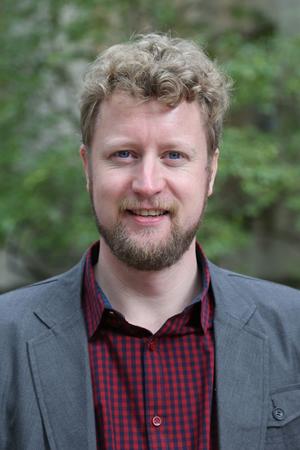 Interviewer: Welcome Hanno. Can you tell us about what started your interest in green chemistry?

Hanno: When I started to study chemistry in Oldenburg, Germany, I had not heard of the concept, and the classes and laboratory education did not include it, either. However, when I was on a European ERASMUS exchange in Spain in 2006, I was first introduced to the concept since I was doing an internship in the group of Prof. Luis in Castellon de la Plana. It immediately made sense to me: why should chemistry produce things that are harmful to people, to the environment, to animals, or to anything really. And then, the related question of why so many productions are petroleum based, does it need to be that way?

Interviewer: Right, once you’ve seen that things can be done differently, it can pique your interest. Can we talk about your current projects?

Hanno: Absolutely. The idea of actively designing something is important, for example, to avoid regrettable substitution. An example for this is BPA (Bisphenol A), which was identified as “of concern” due to its suspected endocrine activity, but it was replaced by a very similar compound, BPS (Bisphenol S), differing from BPA only in the central molecule. Since it wasn’t called BPA anymore, it wasn’t getting the same attention, concern, and regulation, but it was later discovered that it had similar effects.

The idea is that you really need to understand mechanisms of toxicity to avoid “regrettable substitution”. In my Ph.D., I worked on plasticizers: DEHP [di(2-ethylhexyl phthalate)] is a commonly used commercial plasticizer, mainly for the polymer PVC (polyvinyl chloride), with production volumes of several million tons per year. The problem is these plasticizers enter the environment because they aren’t chemically bound to the PVC – they’re just mixed in, so they can leach out into the environment – and they aren’t very degradable once they get there. When it does break down, its monoester MEHP [mono(2-ethylhexyl) phthalate)] is released, which is believed to be an endocrine disruptor, similarly to the mentioned BPA/BPS. My work revolved around designing compounds with equal or better plasticizer effectiveness, while ensuring that these were non-toxic and easily biodegradable, to avoid environmental buildup. This was done in close collaboration with toxicologists at McGill University in Montréal, Canada, from where I obtained my Ph.D.

Interviewer: This fits into Principle Four of the Principles of Green Chemistry: Designing Safer Chemicals.

Hanno: Yes, I believe it’s a good example. There were several properties we needed to determine, across several academic disciplines, to inform the design of these replacement compounds, which is very much in the spirit of Green Chemistry. My current work at the Center is on e-cigarettes, which is different from my work on plasticizers but falls into the same principle. E-cigarettes came to the market only about ten years ago, with the idea that they could be used to help smokers quit smoking, or at least offer a potentially less harmful alternative since no material is burned in e-cigarettes. However, it has become “cool” for kids to use e-cigarettes, partially because there are so many e-liquids that are flavored – you can get fruit flavors, candy flavors, dessert flavors, and more. My favorite flavor is probably “Unicorn Milk”. But in all seriousness, this is of course problematic, as there is mixed evidence that using e-cigarettes can lead to smoking tobacco.

Interviewer: It was an opportunity to expand the market.

Hanno: Yes. There are also no regulations on e-liquids, you can sell e-liquids and you don’t currently have to declare the contents in the US. Commonly, only the proportions of the two common solvents propylene glycol and glycerin are indicated, as well the nicotine content. We’re investigating particularly the flavor additives and what happens to them during the vaping process, which generally involves heating the e-liquid to 200 °C or more, using one or several metallic coils, heated up by a battery. For example, do all of the flavor compounds reach the vapor? Are there any chemical reactions occurring leading to breakdown products? Currently, there is only limited knowledge about this, since “vaping” is a new concept, and there are so many different flavors and flavor compounds out there. To achieve this, we built a “vaping machine”, which allows us to collect aerosols generated by e-cigarettes, which can then be analyzed analytically. Interestingly, in an ongoing current study, we also found that some flavor additives already react with the solvents even before the actual vaping process, for example during shipping and storage, inside the refill bottle.

With our work, we intend to inform studies by our Yale TCORS (Tobacco Center Of Regulatory Science) collaborators in toxicology on the effect of flavor additives and their reaction products on the airways and the lungs. One thing of note about these compounds is that they have “GRAS” status, which stands for “Generally Regarded As Safe”. However, the GRAS status only determines relative safety for ingestion and skin-contact, but not for inhalation, where these compounds could have toxic effects, or irritate the airways, which is potentially a problem for users who suffer from asthma. Just because it’s safe to eat, it doesn’t mean it is safe to inhale. It’s just not the same thing.

Hanno: Back to the idea of design: here it’s basically trying to understand what happens to these flavor additives during the vaping process, and upon inhalation. Once we have a good understanding of the reactivity and possible inhalation risks, this knowledge can be used to come up with sensible regulation of e-cigarette liquids (and devices) to ensure that these do in fact cause less harm to users than smoking tobacco cigarettes. This is of course not only limited to flavor compounds, but also to other compounds that form when “vaping”.

Interviewer: Do you think that the results of these studies can potentially influence regulations?

Hanno: I think it important and necessary to understand what is happening during the heating process, and what effects “vaping” (using e-cigarettes) has on human health. Such data is of paramount importance for the creation of effective regulation.

Interviewer: Are there any results of your research that you can share with us?

Hanno: Certainly. One of the things we’ve looked into with our collaborators from the Yale TCORS is the perception of sweetness of e-vapor generated from e-liquids that contain high-intensity sweeteners, sucralose (“Splenda”) in this case, using different e-cigarette devices. We were able to show that depending on the e-cigarette type, there was a higher concentration of sucralose in the vapor. This correlated with the results our TCORS collaborator (Dr. Barry Green) obtained when asking research participates to rate the level of sweetness of e-vapor generated from two different types of e-cigarettes (the complete study can be found here: https://doi.org/10.1371/journal.pone.0185334). The bottom line of the study is there are differences in terms of delivery to the aerosol between the types of devices and that’s worth keeping in mind, particularly when it comes to regulatory questions.

Interviewer: That’s very interesting. Thank you for taking the time to tell us about your research.

Hanno: Thank you for the opportunity.

Hanno’s interest in Green Chemistry was first sparked during his German combined undergraduate and Master’s degree in chemistry, during which he completed a minor in International Sustainability Management after spending an exchange year in the laboratory of Prof. Luis at Universitat Jaume I in Castellon, Spain, working on ionic liquids.

During his time at McGill University, supervised between Profs. Cooper, Maric, Leask, and Nicell, Hanno developed greener plasticizers to replace the notorious phthalates in a very multidisciplinary fashion. His work focused mainly on diesters of maleic and succinic acid and included their synthesis, their biodegradation kinetics and pattern when exposed to common soil bacteria, the viability of mammalian cells exposed to these, and several material and rheological properties of blends of these with PVC. Complementing his research efforts, Hanno also trained and supervised several graduate and undergraduate students during his Ph.D.

His work on green plasticizers was part of a larger CIHR (Canadian Institutes of Health Research)-funded collaboration to develop plasticizers devoid of reproductive toxicity and included close collaborations with Profs. Robaire, Hales, and Papadopoulos at McGill. From this, especially the succinates showed great potential- which did not go unnoticed by some of the companies producing microbial-sourced succinic acid.

From his prior experience, Hanno is very passionate about the interfaces of chemistry with toxicology and material science, respectively. Currently, he is trying to better understand the health implications of “vaped” e-cigarette liquid by determining what kind of chemical transformation occur. Hanno is also doing organic synthesis with a focus on the chemistry of C-glycosides.