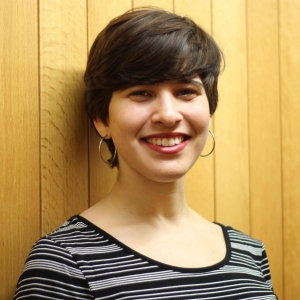 Interviewer: What inspired you to join Dr. Zimmerman’s lab?

Eva: The decision to join Dr. Zimmerman’s lab is one of the most significant choices I’ve made at Yale. I came to Yale not knowing quite what I wanted to study, but I was excited about science and research. I knew there was support for first-year students to do summer research in Yale labs, and I stumbled upon Dr. Zimmerman’s lab while looking at different labs online.
I hadn’t thought much about the environment or engineering before, but I knew I wanted to use science to help people and have an impact on the world, and that’s really what got me excited about the lab. Whether or not this is really true, I had this notion that a lot of scientific research remained “stuck” in academia and never informed any sort of positive change. With the Zimmerman lab, though, I could see how “basic science” research would create solutions to real problems, and that was very important to me.
In my first summer with the Zimmerman lab, Leanne (Gilbertson) taught me all about her work with nanomaterials and I began to research the cytotoxicity of the materials. Basically, we had materials of different shapes and we wanted to see if that impacted how toxic they were.

Interviewer: Would you explain cytotoxicity?

Eva: Yes, that’s important. The prefix “cyto” means cells, so “cytotoxicity” means the quality of being toxic to cells, rather than a whole organism. I’ve noticed that in the literature, “cytotoxicity” is usually used when eukaryotic cells are the focus, and the goal there is usually to learn something about toxicity to humans through specific tissues. So, to name one example, many studies will use cultures of human lung cells as their model, to understand what effect breathing these materials in might have. My research actually uses prokaryotic cells, which are bacteria. Specifically, I use E. coli K-12 as a model organism. I’ve begun using the term “microbial toxicity” when talking about my work to avoid confusion.
There are two reasons that microbial toxicity is important for nanomaterials. The first is that we don’t really know what happens when these nanomaterials - which are being manufactured in greater quantities as they are used in more consumer goods - get out into the environment. Microbes form the basis of many ecosystems and so if something that is very toxic to bacteria gets into the environment, it seems like it could possibly do irreversible damage to the ecosystem. That sounds dramatic, but we want to anticipate these kinds of unintended consequences before they happen so that we can avoid them.
The second reason is that we’re actually interested in using many of these nanomaterials for antimicrobial applications, especially as we try to move away from overuse of antibiotics (due to antibiotic resistance). Nanomaterials have emerged as a promising substitute; I believe silver nanoparticles have already found widespread use as an antibacterial agent.

Interviewer: What are you investigating in microbial toxicity?

Eva: Nanomaterials are awesome because when you change these very basic properties, such as the shape or the size, that has implications for properties that we usually think of as being more complicated – chemical behavior and reactivity, how they agglomerate in solutions, and even their optical properties, how they interact with light. I didn’t believe it at first, but you can literally have a cube of nano-copper oxide, and then a sphere of nano-copper oxide, and even though they’re exactly the same composition, they could have different chemical properties. This really changes what’s possible in terms of designing properties of materials.
My focus is figuring out how nano shape and size influence microbial toxicity so that later we can use this knowledge to inform design. For example, we can engineer some materials to not be toxic, while others we may want to be antimicrobial but not toxic to humans, depending on what they’ll be used for. It all goes back to understanding how do these basic properties influence toxicity and what’s the mechanism specifically through which they cause toxicity.

Interviewer: That makes sense. What is your role in designing and testing the nanomaterials?

Eva: I have done some synthesis of iron oxide with Amanda (Lounsbury), but mostly I don’t work directly with synthesis or characterization. I get nanomaterials from other people, and I get data from the characterizations, too, so that I know what the materials are. Mostly I focus on figuring out how toxic they are.

Interviewer: Are there any findings from your research that you’re able to share?

Eva: There is a paper on copper oxide that I wrote with Leanne (Gilbertson). We had copper oxide nanoparticles and nanosheets – two similarly sized but differently shaped copper oxide nanoparticles. We compared those to bulk copper oxide and found out that there is a difference in how toxic they are to E. coli. The nanosheets are significantly more toxic than the nanoparticles, and both are more cytotoxic than the bulk, which is the non-nano form. This was the first project I worked on and the first paper I was part of. (Gilbertson, L. M.; Albalghiti, E. M.; Fishman, Z. S.; Perreault, F.; Corredor, C.; Posner, J. D.; Elimelech, M.; Pfefferle, L. D.; Zimmerman, J. B. Shape-Dependent Surface Reactivity and Antimicrobial Activity of Nano-Cupric Oxide. Environ. Sci. Technol., 2016, 50 (7), 3975-3984.)
Amanda (Lounsbury) and I also have an upcoming paper on iron oxide that will be out soon.

Interviewer: Excellent. Thank you very much for sharing with us.

Eva graduated from Yale College in 2017 with a B.S. in Environmental Engineering. She is currently pursuing a dual master’s degree with the Yale School of Forestry and Environmental Studies and Tsinghua University School of Environment, located in Beijing, China. She is continuing her work in the Zimmerman lab, applying her knowledge of nanomaterials to energy storage technologies.