Energy-Water Nexus Analysis of Enhanced Water Supply Scenarios in Tampa Bay, Florida and San Diego, California.
Increased water demand and scarce freshwater resources have forced communities to seek non-traditional water sources. These challenges are exacerbated in coastal communities where population growth rates and densities in the US are the highest. 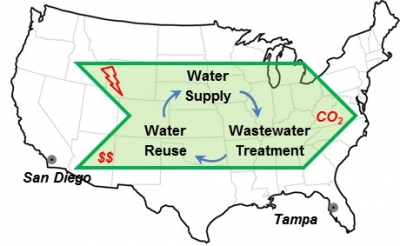 These locations were chosen based on their similar population, land area, economy, and water consumption characters, as well as their coastal locations and rising contradictions between water demand and supply.

Three scenarios were evaluated for each study area:

SD was found to have higher embodied energy and energy cost, but lower GHG emission than TB in most of its water infrastructure systems due to the differences in electricity grid mixes and water resources between the two regions.  Maximizing water reclamation was found to be better than either increasing traditional supply or seawater desalination in both regions in terms of the three impact categories.