Interviewer: What prompted your interest in green engineering? 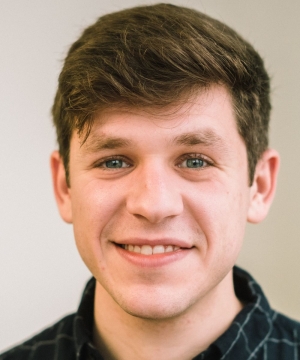 Andrew: My background is in chemical engineering. I was really drawn to it intellectually and academically as an undergrad. However, I struggled to reconcile that outside of classes and science material chemical engineers in industry didn’t seem to be impacting the issues I care about. I didn’t see how I would be able to step into a traditional chemical engineering role to help solve those issues. Yale, and our chemical and environmental engineering department, was a way to pivot more toward working on big picture goals such as clean energy and climate change, while still using what I’ve learned as a chemical engineer.

Interviewer: Can you tell me about what made you interested in being part of Desirée Plata’s lab?

Andrew: What drew me to Desirée’s philosophy, which is rooted in green engineering, is refuting what people commonly think of the role of environmental engineers – putting out fires that have already been made. We often identify issues decades down the road, finding that what we did has larger consequences than what we originally thought, such as spilling chemicals into the environment or dumping waste into a river. Desirée’s philosophy, which is behind what is otherwise very diverse research in her lab, is centered around identifying emerging industries and elucidating the design and decision-making process that can lead to long term sustainability. Nano-material synthesis is a good example of this; people envision all these great ideas and possibilities using nano-materials, but have skipped over synthesizing it well and minimizing impact.

What I’m involved in is called hydraulic fracturing, or “fracking”, an emerging technology used to extract natural gas from shale, a rock found deep below ground across the United States. Fracking arose rather quickly due to emerging technology and economic forces, so our goal here is to identify potential consequences to the environment now before it’s forced upon those performing those operations. In particular, we look at the impacts of water resources, something that people are more aware of now, but as far as they can tell (unless they’re in a water stressed area) they can use all the water resources they need. Sometimes operators will reinject things into the ground, sometimes they’ll set it aside for treatment, sometimes they’ll just store it – which doesn’t strike me as a long-term solution.

Interviewer: You said your project deals with fracking. What specific aspect are you looking at?

Andrew: What I research is the follow up of a group of sampling projects that Desirée conducted; trying to look at all the different places where fracking-derived wastewater ends up. For example, if you take water and send it through a treatment plant and it’s deposited into the environment, what does that look like? One project was examining the impact on ground water surrounding fracking operations. I was looking at the water that reemerges from the well itself. It’s injected as fracturing fluid; it’s usually fairly clean water, bits of sand, and a slurry of chemicals which composes maybe not even one percent. These chemicals are added to maintain the well and increase the operation, which is more complicated than one might initially imagine, and it’s not a standardized recipe of chemicals that are thrown into the water, used to fracture the shale, and then they come back up. They get their natural gas, but now they have all this water as waste – usually hundreds of millions of gallons per well. In samples of this water we’ve identified lots of oil and gas compounds and hydrocarbons.

We’ve also identified some of the additives that have been disclosed – acids, surfactants, solvents – but we’ve also identified what we think are compounds forming underground. Perhaps, when we’re injecting chemicals into this underground environment we’re inducing chemical reactions that aren’t usually seen in the environment. Part of my project has been putting this hypothesis to test in a controlled lab setting, by taking these chemicals that are used and simulating the effects in a controlled way. We’re putting this on the radar of the well operators as a potential risk. By ultimately being able to predict what’s in the fluid when it comes back up, it can become a waste product that they have to do some sort of risk analysis on. If we can identify the starting compounds that are becoming more hazardous constituents later on, maybe it will change the decision-making process on the front end.

Interviewer: That’s fascinating. Your research can potentially inform decisions and maybe change policy or regulations within the fracking industry.

Andrew: Yes, I’d like to think that, especially since it’s a space that doesn’t currently have much policy. The fluids themselves aren’t federally regulated under the Clean Water Act. Waste waters are usually treated on a state to state basis, but it seems to me that efficiency is a much higher priority on their decision-making list when they’re injecting these chemicals into the well. Efficiency is their bottom line. But maybe - if we can show with chemical evidence that ‘chemical A’ or ‘chemical B’ will have equal yields, but ‘chemical B’ might cause a problem when it comes back out in the water - that might play a role in their decision-making process.

Interviewer: How do you view your project as fitting in green engineering?

Andrew: I think it resonates with the idea of designing at the onset for sustainability and for designing for mitigation instead of remediation.

Interviewer: That falls very nicely into the fourth principal of green chemistry.

Andrew: Yes, but instead of designing safer chemicals, we’re designing the process for safety so the process can become greener by nature – which falls more into the engineering side of green chemistry and green engineering.

Interviewer: Right. Thank you for joining me today.

Andrew holds a B.S. in Chemical Engineering from Columbia University (New York, NY). He is currently investigating the interactions and reactivity of chemicals added to hydraulic fracturing fluid used in natural gas extraction. He specifically aims to understand the subsurface formation of organic species, specifically organohalides, that have been detected in flowback water after extraction. To this end, he is developing and utilizing a custom high temperature and pressure reactor system to study the kinetics of potential organohalide formation mechanisms.